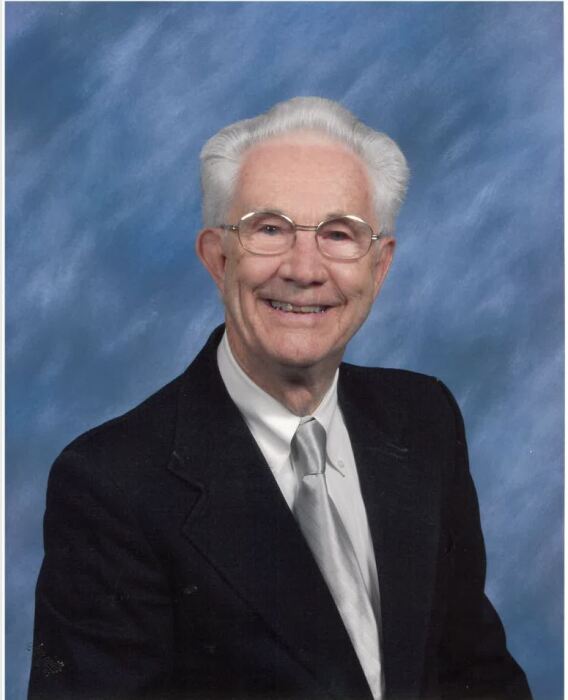 Dr. William C. “Dub” Lady, 97, of Kingsport, received his heavenly wings on Friday morning, July 30, 2021, at The Blake. Born in Fall Branch on February 28, 1924, a son of the late Arch and Mary Pierce Lady, he moved to Kingsport at the age of two. He graduated from Dobyns-Bennett High School in 1943, served as class president, was voted most popular, and was a member of the baseball and basketball teams. Immediately following graduation from high school, Dub served in the U.S. Army with the 718th Railroad Operating Battalion in Normandy, France, Belgium, Luxembourg and Germany. After 33 months of active duty in World War II, he enrolled at Tusculum College under the G.I. Bill.  Dub served as Tusculum College class vice-president, Captain of the baseball team and was an outstanding member of the basketball team.  While attending Tusculum College he met the love of his life, Frances Comerford Lady and they married on June 4, 1947.  Dub graduated from Tusculum College in 1949 with a B.A. in Biology.  He and Frances then moved to Memphis, Tennessee.  While living in Memphis, Frances and Dub were blessed with their first two children, Michael and Cherrell. Dub graduated from The University of Tennessee College of Dentistry in 1952 with a doctorate in Dental Surgery. After receiving his doctorate, Frances and Dub returned to Kingsport and he started his dental career. They were blessed again with two additional children, Brad and Kim. Dub returned to Kingsport and operated his dental practice for over 30 years, retiring at the age of 62. Dub was a lifelong member of First Presbyterian Church, Deacon, Elder and Greeter, member of the Civitan Club, a lifetime square dancer through the age of 95 and a lifetime member of both the American Dental Association and East Tennessee Dental Association.  In 1983, he established The Frances Comerford Lady Memorial Endowment Fund at Tusculum College.  This scholarship is awarded annually to two deserving students on the basis of academic achievement, leadership ability and financial need. Also, he established The W.C. Lady Endowment Fund for the Sports Center at Tusculum College, and Dr. W.C. “Dub” Lady Scholarship Award at University of Tennessee College of Dentistry in Memphis.  This scholarship is awarded annually to two dental students, preferably from East Tennessee.

In addition to his parents, he was preceded in death by his wife, Frances Comerford Lady; sons, Brad Lady, Dr. Michael Lady; and daughter, Kim Lady Lower.

Special thank you to the entire staff of The Blake at Kingsport, especially his caregivers that he referred to as his sweethearts.

The family is recommending face masks be worn.

To order memorial trees or send flowers to the family in memory of Dr. William C. "Dub" Lady, please visit our flower store.