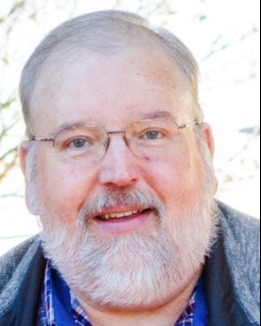 Eddie Ray Dillowe, 61, went to his heavenly home on January 6, 2023 surrounded by his loving family after his brave battle with cancer. He was a Godly man that will greatly be missed for his generosity, care, wit, humor, and love for his family and friends. He was a man of strong faith that led many to the Lord over the years. He retired from Eastman Chemical Company after 21 years of committed labor. He had many talents working with his hands. Whether it be learning to play a new instrument, painting a landscape, or building something for his family, he always had a creative project and loved to learn something new.  You could always catch him humming a tune, whistling while working, or playing a new song on his banjo or dulcimer. He may have had people fooled by his large stature and the occasional grunt or growl, but he was tender-hearted and caring through and through. He was a selfless man to the very end, always caring for others well-being over his own. In his many travels, he always made new acquaintances and loved to tell stories. He was a great storyteller that always entertained his nieces and nephew on the many trips and adventures. Although he never had children of his own, he spoiled and loved his nieces, nephew, great-nieces, and great-nephew like they were his own. He served the Lord through teaching the youth and enjoyed taking them on outings. He served others. That was his gift, and he used it well.

The family is thankful for all the caregivers and medical staff for the years of care.

Eddie is preceded in death by his father, Dr. Edward Dillowe, and baby Galloway.

He is survived by his mother and dear friend, Sue Dillowe; sisters; Lisa Cox (Larry), Barbara Martin (Ron), and Patty Dillowe. He is also survived by his nieces and nephew, Bridget Galloway (Daniel), Sadie Cox, Alyssa Henry (Jarrod), and Luke Martin (Kaylin); as well as his aunts, uncles, and cousins. He adored his great-nieces and great-nephew, Keylie, Kaislie, and Maddox.

The service for remembrance will be held at Hamlett-Dobson Funeral Home, Kingsport on Tuesday, January 10, 2023 with receiving of friends from 5:00-7:00pm and a service to follow at 7:00pm with Bro. Mickey Gibson (who Eddie had the great privilege of leading to Christ), Dr. Dean Hamby, and Bro. Rick Vannoy officiating. Special music from Eddie’s dear friend, Larry McMurray and his group “The McMurray Brothers”.

The burial service will be held Wednesday, January 11th, at 11:00am at James Monroe McConnell Cemetery at 284 Valley Creek Rd., Gate City, VA.

To order memorial trees or send flowers to the family in memory of Eddie Ray Dillowe, please visit our flower store.